The EU Manifesto on Influenza Vaccination 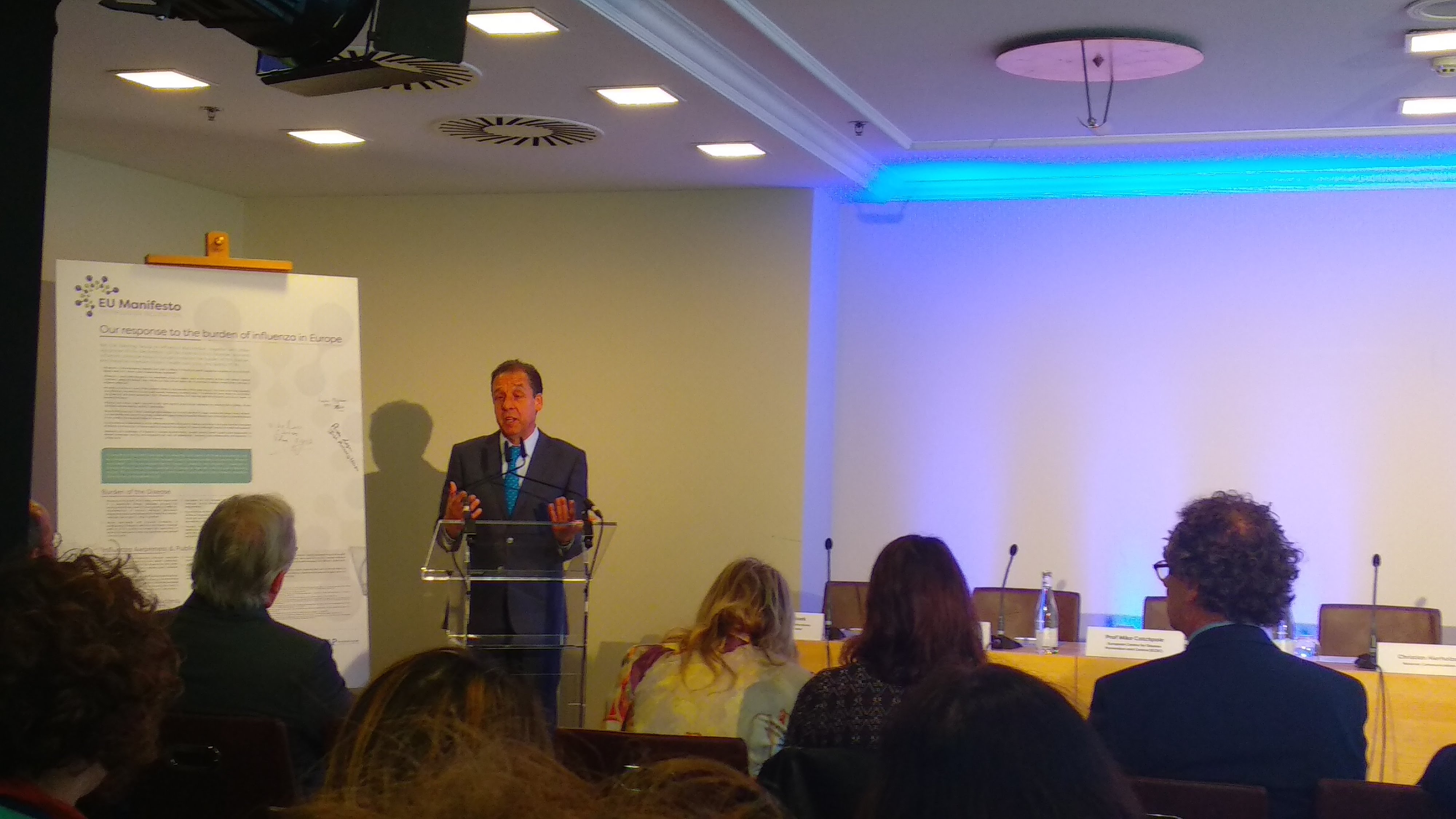 The sophisticated hotel in Brussels hosted an outstanding event with the most skilful researchers and notable representatives of European health and medical institutions, who came together to present a manifesto on the need to expand the coverage of Influenza vaccination in Europe.

Such collective effort, lead by the Steering Group for Influenza Vaccination, must be taken in the context of the 2009 European Council Recommendation on seasonal influenza vaccination, which encouraged Member States to implement strategies to increase the scope of such vaccination, with the aim to cover at least 75% of the population.

Excellently introduced by the two co-chairs of the Steering Group on Influenza Vaccination, Ms. Grossetête – through video recording – and Prof Szucs, the launch of the manifesto counted with the inestimable support of Mr. Prats Monné, Director-General for Health and Food Safety in the European Commission, who took the opportunity to announce that the Commission is working in a new proposal for a Council recommendation on the urgent need to reduce the burden of this disease in European countries. The proposal was scheduled to be released to the public on the 25th of April.

Throughout the event, a panel made of eight speakers from different backgrounds and notable positions in public health institutions explained the motivation behind the drafting of the manifesto and addressed the challenges that the epidemic threat of influenza in Europe is posing to public health. Although the development of the influenza vaccination is considered one of the greatest medical achievements of the past century, coverage rates of this seasonal vaccination remain low and even declining in most countries in Europe. This fact has raised deep concerns in the medical community since there are certain groups of people who are particularly at risk of suffering life-threatening bursts of this disease, resulting in 650,000 deaths worldwide every year.

The expert panel discussion brought together a diverse range of stakeholders who gave their opinion on the weaknesses of the current vaccination spread policies and suggested a number of actions to approach the visible lack of information regarding the life-threatening nature of influenza. Virtually all the decision-making groups were represented in the panel: Mr. Aligiannis for the European Patients’ Forum; Prof. Catchpole for the ECDC; Prof. Esposito for the World Association for Infectious Diseases and Immunological Disorders, Ms. Logan for the Irish Pharmacy Union, Mr. Oomen for the ESNO and Dr. Van der Hoek, for the World Medical Association, as well as Prof. Szucs. Amongst others, they suggested health system-wide policies to raise awareness amongst the population, specific training for doctors, nurses and pharmacists, and a people-centred, effective outreach program to ensure a comprehensive understanding of the benefits of seasonal influenza vaccination.

The event, which finished with the signature of the Manifesto, was an overall accomplishment as for the quality of the interventions, the world-class attendees and the superlative scientific effort that lies behind the Manifesto, which yet was communicated in a very user-friendly way for the untrained listener.

We would like to give a special mention to Renaissance Hotels, who managed to offer an exquisite conference in a perfect setting to call for the promotion of influenza vaccination uptake. We will be more than pleased to offer our services to public and private actors who decide to brave on such challenging goal.