A group of 42 CEOs from some of Europe’s major construction and building materials companies have signed a letter to European Commission, urging it to show “vision” in its revision of the Energy Performance of Building Directive and the Energy Efficiency Directive, which is due to take place this autumn.

“We, representatives of major European industries and building community, see the upcoming review of the Energy Performance of Building Directive (EPBD) and the Energy Efficiency Directive (EED) as a unique opportunity for the European Union to act “big on big” issues: jobs and growth, while putting our economies on the right track to meet the Paris Agreement,” the business leaders said.

The average new building is at least five times more energy efficient than an old building. But 35% of the EU’s building stock is more than 50 years old and 90% will still be standing in 2050, according to the Commission.

In its contribution to the Paris Agreement, the European Union committed to reduce its CO2 emissions by 40% by 2030, compared to 1990 levels, and to become carbon neutral by 2050. Improving the energy efficiency of Europe’s buildings is essential if the EU is to achieve this target.

The EU executive estimates that widespread energy efficiency renovation could reduce the bloc’s overall energy consumption by up to 6% and cut its CO2 emissions by 5%.

The EED limits governments to buying only highly energy efficient buildings, and obliges them to report on national rates of building renovation.

Widely accepted figures put the EU renovation rate of buildings at just 1%. But the true figure could be even less because there is no common standards of what constitutes renovation.

Stronger leadership from the EU would spur investment in energy efficiency renovation, the letter’s signatories said. As 90% of actors in the building industries are SMEs, this would have a positive impact on the European economy, they added.

Each year the International Day of Peace is observed around the world on 21 September. The General Assembly has declared this as a day devoted to strengthening the ideals of peace, both within and among all nations and peoples.

The Day’s theme for 2016 is “The Sustainable Development Goals: Building Blocks for Peace.”

The 17 Sustainable Development Goals were unanimously adopted by the 193 Member States of the United Nations at an historic summit of the world’s leaders in New York in September 2015. The new ambitious 2030 agenda calls on countries to begin efforts to achieve these goals over the next 15 years. It aims to end poverty, protect the planet, and ensure prosperity for all.

The Sustainable Development Goals are integral to achieving peace in our time, as development and peace are interdependent and mutually reinforcing.

“The 17 Sustainable Development Goals are our shared vision of humanity and a social contract between the world's leaders and the people,” said UN Secretary-General Ban Ki-moon. “They are a to-do list for people and planet, and a blueprint for success.”

Sustainability addresses the fundamental needs of the present without compromising the ability of future generations to meet their own needs. Modern challenges of poverty, hunger, diminishing natural resources, water scarcity, social inequality, environmental degradation, diseases, corruption, racism and xenophobia, among others, pose challenges for peace and create fertile grounds for conflict. Sustainable development contributes decisively to dissipation and elimination of these causes of conflict and provides the foundation for a lasting peace. Peace, meanwhile, reinforces the conditions for sustainable development and liberates the resources needed for societies to develop and prosper.

Every single one of the 17 Sustainable Development Goals is a building block in the global architecture of peace. It is critical that we mobilise means of implementation, including financial resources, technology development and transfer, and capacity-building, as well as the role of partnerships. Everyone has a stake and everyone has a contribution to make. 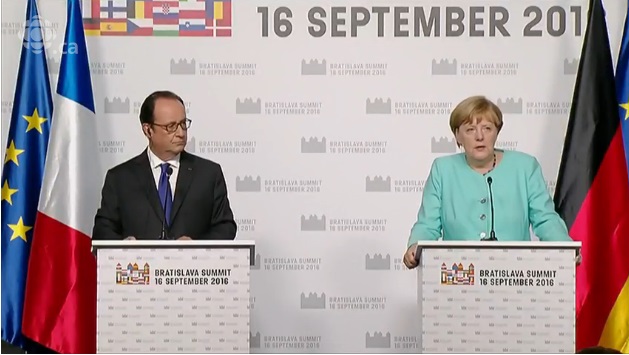 The Heads of Governments of the EU member states were gathered -for the first time without the UK representative- for an informal meeting on the 16th of September. Fiscal Policy, international trade, Brexit, as well ashot topics such as the common defence or migration were on the official agenda with the aim to draw the road map to be followed by European Governments over the next 12 months.

Together with the Slovak Prime Minister Robert Fico and the President of the European Council Donald Tusk, Jean-Claude Junker expressed its satisfaction concerning the firm support Member States have announced regarding the new initiatives declared in his speech about the State of the Union.

More particularly, Junker highlighted a unanimous backing concerning the pace recently adopted with regards to the promotion of the EU's Digital Single Market. These measures should foster Europe’s “modernisation, economic growth and creation of new jobs" the President said. EU leaders also approved the commission’s propositions aiming at increasing the amplitude of Europe’s investment plan, which has already mobilised €116 billion during the first year of its implementation.

Concerning the migration crisis, Junker confirmed that the EU is already implementing measures in order to respond to the request of Bulgaria, which has to face increasing pressure on its frontier with Turkey. The President affirmed that, in addition to material support aimed at protecting the frontier from illegal migration, the Union will provide €108 million in emergency funding in order to strengthen Bulgaria’s reception capacities. The objective is to raise this figure to €160 million in the coming weeks in order to fully respond to the needs of the Bulgarian government.

Paris Agreement – Slovakia is on board

After France, Hungary and Austria, Wednesday 22 september Slovakia became the 4th European country to ratify the Paris Agreement after its Parliament voted in favour of the international treaty aimed at fighting climate change. The Paris Agreement seeks to keep the increase in global average temperature by the end of this century to below 2°C above pre-industrial levels.

The motion for ratification was presented by the Slovak Environment Minister László Sólymos. “I’m happy to see that the Agreement has passed through the ratification process of our Parliament, and I believe that Slovakia will set a positive example for the other EU member states,” Sólymos said after the vote.

“As the country holding the Presidency of the Council of the EU, we’re now able to focus fully on completing the ratification procedure at European level as soon as possible. This is one of our key priorities,” said the minister.

Slovakia aims to coordinate the ratification process so that the EU can finish it by 7 October 2016. To this end, Sólymos has called an extraordinary session of the Environment Council on 30 September in Brussels.

If all EU countries ratify the agreement, the climate conference that opens in Marrakesh, Morocco, on 7 November, could feature the first meeting of the parties to the Paris Agreement, including the EU and Slovakia. The parties would thus be involved in decision-making on crucial issues regarding the implementation of the Agreement.

The treaty will enter into force on the 30th day after the date on which at least 55 parties to the United Nations Framework Convention on Climate Change, accounting in total for at least 55% of global greenhouse gas emissions, have deposited their instruments of ratification.

China and the US, which together represent the largest share of global emissions, have already completed this process. The EU is the third largest emitter.

To date, the treaty has been ratified by 29 countries representing over 40% of global emissions. Another 30 countries are set to deposit their instruments of ratification today at a ceremony organised by United Nations Secretary-General Ban Ki-moon.

Slovak President Andrej Kiska now has to append his signature to Parliament’s approval of the ratification.Kiska represents Slovakia at the current session of the UN General Assembly in New York, where he is seeking to send a strong message later this week and urge countries in which the ratification procedure is still ongoing to complete the ratification process as soon as possible.

For more information about The Paris Agreement and climate change actions in general follow the links: